This week, Project Manager Justin Yellico shares the story of his first project, and how a little positivity can go a long way on the job site. 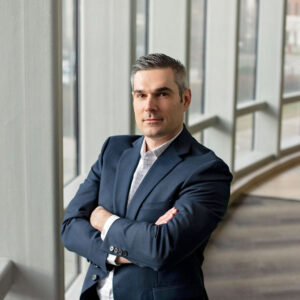 After separating from active duty, my first construction job was working for a small contractor in West Seneca.

The VA hospital was renovating their catheterization lab – also known as a cath lab – and we needed to fit out the hospital’s ambulance garage to serve as a temporary cath lab in the meantime.

This was a job that was already going on when I “inherited” it. It had been delayed for about a year or so, for a number of reasons. One of the reasons being that the VA was having a hard time coordinating the shutdown of the original cath lab so that the construction could begin on the temporary one. So, that was kind of a big challenge right from the get-go.

It turned out that these types of challenges would be present throughout the project’s entire lifespan.

An interesting part about working for the VA is that they do a very good job of incorporating stakeholders into the decision-making process. This includes everybody from the nurses who would be operating the cath lab, to the engineering department, to contractors.

To be fair, though, they had a very small staff and they were completely overloaded with work. Those conditions would have affected the decision-making process on any job.

I learned from the get-go that for this project to be successful, I would have to figure out how to collaborate with different stakeholders. We were a third-tier contractor underneath a construction manager, and we were in charge of supervising general trades. Keeping in communication with everyone was a challenge.

Fortunately, my background is as a military officer. This was familiar territory, which made things easier to orchestrate. The more technical piece was something that I was still learning, though. The learning curve there was pretty steep.

But I dove in with a lot of curiosity and a desire to learn everything I could. I approached the project with a positive, “can do” attitude.

Because of my positive approach, people who were otherwise (and understandably) not thrilled about coming to work at a cath lab every day, really enjoyed the times they got to deal with me.

There were a number of sources of friction on that job. The project was marred by delays, challenges, constant design changes, etc. But I think 90% of getting that job done was having a positive attitude.

Eventually, I think I was able to connect with other stakeholders. I spent a lot of time just talking to people and feeling them out, pitching ideas back and forth, etc. That environment set the conditions for success and allowed us to get things moving.

We eventually got the ambulance garage fit-out with med gas, plumbing, electrical, finishes, millwork, etc. I remember there was a trailer that was going to house the temporary equipment. When that finally arrived, there were all kinds of traffic control considerations with the crane that had to pick and set the thing. Just a lot of moving parts.

The project itself was relatively small, compared to some of the ones I get to work on now. I imagine the budget was probably less than $500,000.

But it was my first time, it was a great opportunity to learn and, most importantly, it was a lot of fun to do.

Stay tuned to this space to read more “first project” stories from other members of the Peak team.