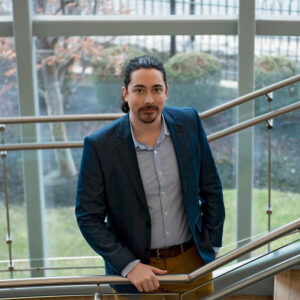 This week, Project Manager John Scherer shares maybe the coolest first project story of them all:

The first project I was assigned to was for Metallica.

I started my career right out of grad school, working as a designer for a company that built concert stages.

Metallica were designing a big stage that was intended to be used as part of a 3-D concert movie. The band was going to play three shows in Mexico City, then two shows in San Francisco. Everything would be filmed and recorded for this theatrically-released film, and a companion album, both titled “Through the Never.”

Specifically, I worked on some of the stage. It was a 360-degree stage that was in the center of the arena. The whole stage itself was a big video screen. I did some work on that part of it as well.

More specifically, I worked on this large, 30-ft “lady justice” statue. It was a replica of the statue from the cover of the album “… And Justice For All”. 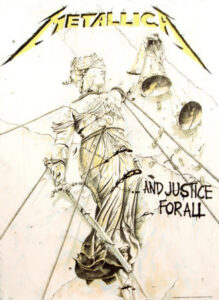 The point of the “lady justice” statue being there was that, at the end of the song “… And Justice for All,” there was going to be a lot of pyrotechnics and the statue would eventually crumble apart, apparently symbolizing the crumbling of justice in the country.

In the original design, the statue was going to be held together by suction. There would be a huge air compressor under the stage that would hold all of the pieces of the statue together, and it would release at the right moment.

Unfortunately, in order for this thing to work, all of the plates that we had that held everything together had to be perfectly aligned. This would have been pretty impossible to do during a show, in the time that the crew would have had to build the thing. They literally would have only had a couple of minutes to do it.

So, we redesigned the statue using magnets to hold everything together, instead of air. Then, at the time in the show when the statue was supposed to crumble, this hammer-like thing would come up through the bottom of the statue, the magnets would release, the pieces would crumble and pyro would go off.

It was a pretty cool moment; both in the show, and my career.

Stay tuned to this space to read more first project stories from other members of the Peak team.

Lee has made commercial construction management his life’s work, focusing on building places where people live like multi-family, hospitality, student housing, and senior living for successful developers. He’s also committed to the values of this country and has over twenty five years of service in both the active and reserve forces as a Commissioned Officer in the US military. Lee embraces the power of a committed team that collaborates early and often and is happy to guide any developer who shares the same philosophy for success. Reach him anytime at LeeC@TeamPeak.com.